The first activities that led to the establishment of Grace Ev. Lutheran Church of Glendale, Arizona, were services that were conducted irregularly at various places in the Glendale Area between 1921 and 1924. These services were conducted by the Rev. Immanuel G. Frey who was at that time pastor of Zion Ev. Lutheran Church of Phoenix. According to his best recollections, these services were held largely for the benefit of members of Zion church who lived in this area. In 1924 Pastor Frey was replaced at Zion by the Rev. H. Koch, who asked Pastor O. Hohenstein to assist him in the work at Zion. In that capacity, Pastor Hohenstein continued to hold services in Glendale from time to time. On November 21, 1926, regularly held services were begun. At first, the services were held every other Sunday, but in January 1927, weekly services with Sunday School were begun. The first of these services, held at the Woman’s Club building at the corner of N. 56th and W. Glenn Avenues, was attended by 19 people with nine attending Sunday School.

On February 1, 1927, a meeting was held at Zion of the parents of the children attending Zion Lutheran School. It was noted that all the families with children in Zion school, except two, were located in the Glendale area and it was proposed that these families seek a release from Zion for the purpose of opening another school in Glendale which would be associated with the Glendale Mission. As a result of these discussions, seven families of Zion requested transfers to the Glendale Mission. Because it was felt that granting these transfers would seriously disrupt the economy of Zion and might possibly bring about the closing of Zion’s school, Zion was loathed to grant these releases. An appeal was made for assistance to the District Mission Board of the Southeastern Wisconsin District of the Wisconsin Ev. Lutheran Synod. In a voters’ meeting on April 27, 1927, attended by Pastors Wm. Mahnke and John Jeske, both the Glendale Mission and Zion Lutheran School were promised support from the Synod. Thereupon a peaceful release was granted to the seven families.

With the nucleus of these seven families, including that of Pastor Otto Hohenstein, the Glendale Mission became a growing concern. In the Fall of 1927, a day school with the pastor as the teacher was opened in a garage building just north of Glendale Avenue on 58th Avenue at the site of the present city hall. This building also served as a temporary place of worship. On September 25th, 1927, in a meeting at the home of Mr. & Mrs. George Keim at W. Bethany Home and 19th Avenue, a constitution was adopted and the mission was named Grace Ev. Lutheran Church of Glendale, Arizona.  The first officers were:

These men together with their families were also the charter members of the congregation. Other families whose names appear in the early records include Carl Benson, Eda Amend, Geo. Franzmeier and Newton R. McMillan. 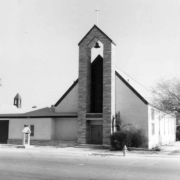 This congregation has from the very beginning been greatly interested in the cause of Christian education. A Lutheran elementary school was being conducted before the church was organized. Pastor Hohenstein was the teacher until his release in 1947. The 1946-47 school year was completed by Pastors H. Rosin, G.P.Eckert and R. H. Zimmermann. In the days when the school was a one-room venture, lessons were conducted by. . .

In addition to our Lutheran elementary school, a Sunday School has been operated and maintained during Grace’s entire history. This includes a Bible class for young people and adults. To list all who have served as teachers in our Sunday School would be an impossible task… and, at best incomplete. Deep appreciation is given to those who have given their time and talent and energy to teach the children of our congregation the basic truths of the Christian faith.

During the early 70’s WELS members began making plans for establishing an area Lutheran high school in Arizona. The result of these discussions is Arizona Lutheran Academy which opened in the fall of 1978 with an enrollment of 43 students. The academy is supported by a Federation of congregations throughout the state of Arizona, of which Grace is a member.

A history of stable leadership…

In the history of Grace, there have been only six resident pastors. Pastor O. Hohenstein was the founder and first pastor. He continued to serve until 1947. Pastor R. H. Zimmermann actively served the congregation from 1947 to 1983. Until his death in 1987 he served in a semi-retirement role by making hospital calls and visiting our elderly and shut-ins.

In 1944-45 the congregation was cared for temporarily by Pastor L. Wenzel while Pastor Hohenstein was on leave of absence to serve the prisoners of war who were confined in this area. In 1976-82 a vicar was requested to assist the pastor with the growing workload in the congregation. Beginning in 2013, Vicars again became a part of our ministry.

In February of 1983, Pastor D. L. Halvarson received and finally accepted the congregation’s call to be their pastor. He was installed on April 17, 1983, and served until March 2002. In 1986 the congregation applied for a graduate of our Wisconsin Lutheran Seminary to serve at Grace as a second pastor. T. W. Biedenbender was ordained and installed as a second pastor of Grace on August 10, 1986. He accepted a call to Detroit, Michigan in May of 1991. In July 1991 Pastor David R. Clark accepted the congregation’s call and moved from White Rock, New Mexico. He was installed in September of the same year.

In April 2002, the congregation applied again for a graduate from Wisconsin Lutheran Seminary. Pastor Hernandez Daylo, Jr. was assigned. He was ordained and installed on July 28, 2002. He accepted the call of Prince of Peace, Yuma, Arizona in April 2014.

In December 2014, Pastor Mark Jacobson received and accepted the congregation’s call as an Associate Pastor. He relocated from Marana, Arizona, and was installed on January 11, 2015.

Our Property and Buildings

It started with five lots on 56th…

Even before the congregation was organized, arrangements were made to purchase five lots on N. 56th Avenue, beginning at W. Palmaire Avenue. In the Fall of 1927, a loan of $6,900 was obtained to build a chapel-parsonage. Most of the labor was supplied by the members. By April 30, 1928, the building had proceeded to a point where Pastor Hohenstein and his family were able to take up temporary living quarters in one end of the church. By the end of May, the parsonage was completed and the first services were held in the chapel. The entire unit was dedicated on November 28, 1928. Pastor E. E. Guenther of Whiteriver and Pastor C. Albrecht of Douglas were the guest speakers for the occasion.

Beginning in 1946 the congregation embarked upon a period of planned expansion. All the property in the block on which the church is located was purchased as it was offered for sale. Only the property on the southeast corner was and has been passed by. A permanent teacherage was purchased across Myrtle Avenue opposite the school playground. In March of 1986 additional property was purchased by the church across 56th Avenue. This was done for possible future expansion.

The future expansion came in 2005 as 56th Avenue was permanently removed between Palmaire and Myrtle to build a new Sanctuary and Fellowship Hall.

1946 – a temporary frame school building, later removed, was built;
1947 – a building with stage and storage was built – later removed;
1952 – church was built and dedicated;
1953 – parsonage was built;
1956 – the old parsonage was remodeled into a kindergarten room, the first chapel was used as the fellowship hall; a kitchen and some rest rooms were added;
1957 – the two-room classroom building north of the first church was added;
1960 – a pastor’s study along with a conference room (now also a pastor’s study) along with a classroom and principal’s office was built;
1964 – the balcony of 1952 church was extended to accommodate 75 additional worshippers;
1969-70 – an additional classroom with restroom and a work room was built;
1972 – The organ in the 1952 church, a custom Conn complete with three manuals and 10 speakers, was dedicated in December;
1973 – basketball/volleyball courts and play area was installed on the northwest corner of the property and also serves as a parking lot;
1981 – old parsonage/Kindergarten room was torn down and replaced by Zimmermann Hall. The old chapel was then remodeled into new conference room (now church/school office), Kindergarten room and storage;
1986 – a new four-room classroom building with rest rooms and storage was built and dedicated November 2;
1987 – the Kindergarten room in old chapel was expanded by eliminating storage area that was on east end.
2005 – new church and fellowship hall built and dedicated.
2006 – classrooms air-conditioned.
2007 – Zimmermann Hall converted to a preschool.
2014-15 – Courtyard between 1929 Church, 1952 Church, and Zimmerman Hall is renovated with new landscaping, planters, and audio/visual cabling.