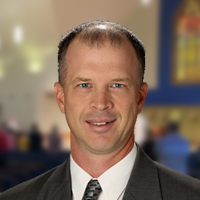 21 When Jesus had again crossed over by boat to the other side of the lake, a large crowd gathered around him while he was by the lake. 22 Then one of the synagogue leaders, named Jairus, came, and when he saw Jesus, he fell at his feet. 23 He pleaded earnestly with him, “My little daughter is dying. Please come and put your hands on her so that she will be healed and live.” 24 So Jesus went with him. 35 While Jesus was still speaking, some people came from the house of Jairus, the synagogue leader. “Your daughter is dead,” they said. “Why bother the teacher anymore?” 36 Overhearing[a] what they said, Jesus told him, “Don’t be afraid; just believe.” 37 He did not let anyone follow him except Peter, James and John the brother of James. 38 When they came to the home of the synagogue leader, Jesus saw a commotion, with people crying and wailing loudly. 39 He went in and said to them, “Why all this commotion and wailing? The child is not dead but asleep.” 40 But they laughed at him. After he put them all out, he took the child’s father and mother and the disciples who were with him, and went in where the child was. 41 He took her by the hand and said to her, “Talitha koum!” (which means “Little girl, I say to you, get up!”). 42 Immediately the girl stood up and began to walk around (she was twelve years old). At this they were completely astonished. 43 He gave strict orders not to let anyone know about this, and told them to give her something to eat.

THE SWEET SOUNDS OF FREEDOM IN CHRIST

The sweet sounds of July 4th, can you already hear them in your head? The bursting of fireworks in air? The crackling of firecrackers on the ground, the piercing sound of bottle rockets? Maybe you can even hear the fizzling of sparklers. Patriotic music is on all the radio stations today and if you do some channel surfing you will certainly find a patriotic documentary with great historical quotes and dramatic reenactments of events. All of these sounds: the fireworks, the music, the documentaries are sweet sounds of freedom we enjoy as Americans. The Gospel appointed for today, the 6th Sunday of Pentecost, also has some sweet sounds, sounds that clearly convey the freedom we as Christians have in Christ.

In the Gospel a prominent man named Jairus wasn’t feeling very free. His 12-year old daughter was more than sick. She was dying and there was only one thing Jairus could do about it. Jairus could look for Jesus. And what a happy coincidence! Jarius found Jesus. You can see the desperation of Jairus in his falling at Jesus’ feet and you can hear the desperation in his pleading voice, but don’t let all his desperation distract you from his confidence. Jairus has faith. There is no indication that this healing is a hunch, that it might work. Jairus assumes it will work. Come and do “A” so “B” is the result. “Put your hands on her so that she will be healed and live.” “So,” as the gospel writer tells us in an unremarkable way in verse 24, “Jesus went with him.”

Time is of the essence here. If there had been an ambulance, Jairus would have been yelling to step on it. But the crowd was like our Phoenix traffic and in that traffic was a woman who did not pull over to the side of the road. This woman is what the gap in our Bible verses is all about. We don’t know her name, but we do know her desperate need. She had been hemorrhaging blood for as long as this little girl had been alive, a chronic illness. And this woman doesn’t want to stop Jesus or even talk to Jesus. Like Jairus this woman has faith too. She believes if she only touches Jesus her chronic illness will get better and she is absolutely right. She touches Jesus and she gets better immediately. She doesn’t think Jesus would notice, but Jesus notices and Jesus holds up traffic to talk with her.

We don’t know how long they talked, but we do know in verse 35, “While Jesus was still speaking (to this woman), “some people came from the house of Jairus, the synagogue leader. ‘Your daughter is dead,’ they said. ‘Why bother the teacher anymore?’” Talk about a punch in the gut followed up with an upper cut to the chin.” Daughter’s dead. Ouch! Don’t bother Jesus. Double ouch!

Have you suffered those kind of punches? Catastrophic news about your family and tempting thoughts that God can’t help you, that you are bothering him? Grief counselors talk about 5 stages of grief. Denial: This can’t be happening to me. Bargaining: If I do this, God will do that. Then there is anger and despair. Our sinful nature wants to blame someone. We might blame ourselves for not do something different. We might blame others for not helping our situation. We might blame Jesus for letting a bad thing happen to us. Our sinful nature causes us at times to feel hopeless. If you know something about feeling angry and hopeless, listen to this: “Overhearing what they said, Jesus told him, ‘Don’t be afraid; just believe.”

Faith is always a miracle (an act of God), but faith as a miracle of God is all-the-more evident when all the worldly evidence would point against having faith. No one on earth lives in continual peace. Nothing grants us immunity from occasional heartache and feelings of hopelessness. Where is your help at those times? What will keep you from giving up hope in seemingly hopeless situations? What will keep you from getting angry at God or others or even yourself? At times, the only thing that will keep you following Jesus are those sweet sounds of freedom, “Don’t be afraid, only believe.”

“The child is not dead but asleep.”

For Jarius those words hint at a possible resurrection, but the crowd is not thinking resurrection. The crowd disappears. When Jesus enter the home of Jairus and said, “The child is not dead but asleep,” the professional mourners broke out in laughter. Jesus wasn’t joking and Jesus wasn’t trying to soften the blow to Jairus with empty words. Sleeping better describes what happens when the body, like a tent is packed away after camping, just waiting for the next trip. When believers in Jesus die, the holy angels carry the souls of God’s children to heaven and place them in the tender arms of the Savior. They are safe and surrounded in glory, they live and reign to all eternity. At the same time their bodies, but only their bodies, “rest in the earth, eagerly awaiting the words of Jesus when he returns on the Last Day. We look at life as a steady progression and that is why the people laughed and still laugh. Jesus looks at life based on how life turns out in eternity. That is why Jesus says asleep.

Jesus talks to the dead girl as if she is alive and the gospel writer wants his Greek readers to hear the original sweet sounds as they were spoken by Jesus in Aramaic, “Talitha koum!” Later Jesus will wake up his dead friend Lazarus in the Greek language, “Lazare, doiro echo.” No matter the language, the most beautiful sound will be the wake-up call Jesus gives us and all believers on the Last Day.

Our section closes with some housekeeping matters. “Jesus gave strict orders not to let anyone know about this, and he told them to give her something to eat.” Apparently, death can make you hungry. The little girl was not limited to a liquid diet. She needed lunch and Jesus made sure she got that too. Jesus takes care of all needs, great and small. No matter is too big for Jesus and no matter is too small for Jesus either. Another matter had to do with the cover-up. Jesus did not want the word to get out about this miracle. Strict orders. Jesus would rather have had the news be that the little girl was sleeping, but now she was awake and feeling better. Jesus didn’t want this good news to get in the way of THE good news.

The good news is Gospel of Jesus Christ. The Good News is God made Jesus who had no sin, to be sin for us so that through faith in Jesus we might have no sin, only the righteousness of God. The Good News is that though Jesus was rich with heavenly glory, yet for our sakes Jesus became poor with the debt of our sins so that we through his poverty experienced on the cross might become rich with heavenly glory with him. The good news is spiritually we were once like Jairus. Our sin should have us face down on the floor, pleading for mercy. Imagine that! Also, imagine this reality. Our God has been merciful to us and has forgiven all our sins through faith in Jesus. What a sweet sound!